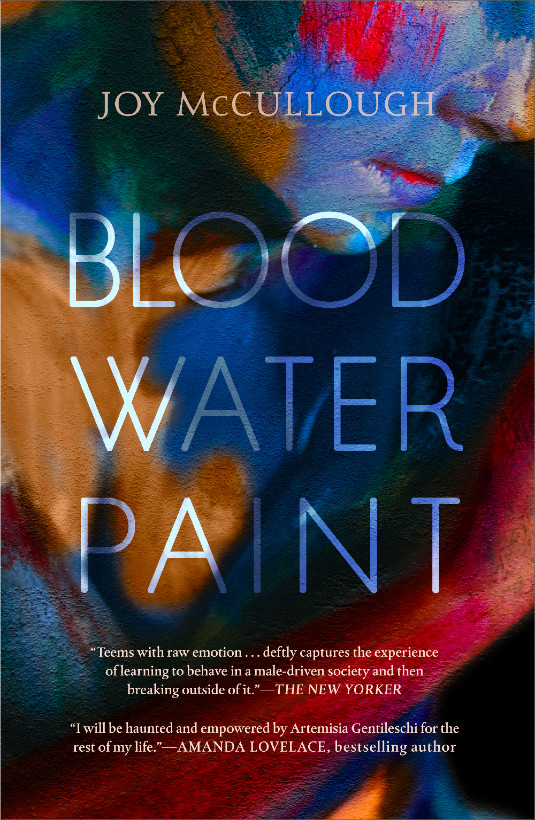 A stunning debut novel based on the true story of the iconic painter, Artemisia Gentileschi.

Her mother died when she was twelve, and suddenly Artemisia Gentileschi had a stark choice: a life as a nun in a convent or a life grinding pigment for her father’s paint.

By the time she was seventeen, Artemisia did more than grind pigment. She was one of Rome’s most talented painters, even if no one knew her name. But Rome in 1610 was a city where men took what they wanted from women, and in the aftermath of rape Artemisia faced another terrible choice: a life of silence or a life of truth, no matter the cost.

I will show you
what a woman can do.

“An impassioned, lushly described account of a young woman who refuses to dwell in secret shame. Blood Water Paint fits smoothly into the current conversation surrounding the #MeToo movement.”—Chicago Tribune

“Coming out of the novel, I knew I would be haunted and empowered by Artemisia’s story for the rest of my life.“—Amanda Lovelace, bestselling author of the princess saves herself in this one

“Tragically relevant and unflinchingly feminist, Blood Water Paint is the kind of book all historical fiction should aspire to be.”—Mackenzi Lee, New York Times bestselling author of The Gentleman’s Guide to Vice and Virtue

★”McCullough has managed to vividly capture a singularly brave, resilient feminist who became an icon during a time when women had almost no agency. Her story and the stunning verse through which it is told will resonate just as strongly with readers today. A captivating and impressive debut about a timeless heroine.” —Booklist, starred review

★”McCullough’s beautifully crafted text will inspire upper-middle/high school readers to research the true story upon which this powerful piece of historical fiction is based. The poetry is clear and revelatory, exploring Artemisia’s passion for both art and life. The expression of her intense feelings is gripping and her complexity of character make her a force to be reckoned with, both in her times and in ours. VERDICT: A thrilling portrait of a woman of character who refused to be dismissed; this belongs on every YA shelf.“—School Library Journal, starred review

★”A haunting, stirring depiction of an unforgettable woman, Artemisia’s story will resonate deeply with readers today and beyond.”—Publishers Weekly,starred review

“A visceral reminder that women have suffered and stood strong throughout time.”—Mindy McGinnis, award-winning author of The Female of the Species.

“Both a grave reminder of how little has changed and a hopeful testament to how much more we might achieve, McCullough’s debut is a must read.”—Gae Polisner, author of The Memory of Things

“Blood Water Paint is a deftly layered portrait, at once intimate and universal.”—Melanie Crowder, author of Audacity

“McCullough’s stunning, immersive debut tells a timely story that’s sure to stay with you long after you finish.”—Buzzfeed

“[An] incandescent retelling both timeless and, alas, all too timely.”—Kirkus

“McCullough’s debut novel is one of a kind. … [A] truly inspiring and impactful story.”—Romatic Times

“Filled with hope and an important message that women’s voices cannot be silenced.”—Book Riot

“For lovers of writers like Laurie Halse Anderson and An Na, Blood Water Paint is feminist historical fiction written in verse, giving readers a glimpse into the teen’s most intimate thoughts while highlighting a centuries-old, yet startlingly familiar time and place where men took what they wanted from women with practically no consequences.”—Bustle

“This intensely passionate and powerful exploration of women’s lives, stories, truths, and power is a masterpiece.” —Teen Librarian Toolbox